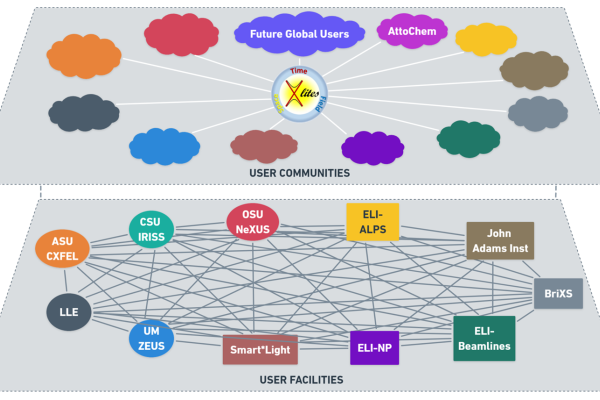 The National Science Foundation (NSF) announced the funding of a multi-institution, international collaboration to develop and apply “extreme light” to advance the frontiers of science and engineering. The Ohio State University is the lead institution for this Extreme Light in Intensity, Time, and Space (X-lites) collaboration initiative. X-lites aims to promote collaboration among researchers around the world to make full use of new laser facilities, such as the NSF NeXUS facility at Ohio State, improve communications among otherwise separated research fields, and promote broad participation at the frontiers of laser-driven science.

X-lites is one of eight initiatives funded this year by the NSF Office of International Science and Engineering through their Accelerating Research through International Network-to-Network Collaborations (AccelNet) program. The AccelNet program fosters high-impact science and engineering by taking advantage of the Science of Team Science (SciTS). AccelNet supports international communities of researchers who are tackling grand challenges that require shared and coordinated effort.

The invention of the laser in the late 1950s enabled a wide range of scientific and technological advances, from communications to surgery to facial recognition to analysis of Martian soil. Laser science and technologies continue to advance, and a new generation of lasers are accessing frontiers of laser-matter interactions at the highest intensities, the fastest times, and the shortest distances yet obtained. The X-lites program builds on these technological advances to organize and support scientists around the world as they research and apply this extreme light. X-lites will create a new global network that will unite the work of scientists across disciplines and geographic borders to support the next generation of scientific advances, researcher training, capability development, and laser technology. X-lites will accelerate discovery and invention through its support of team building, knowledge sharing, and education.

X-lites will apply SciTS to enhance existing, separated networks of researchers who are developing and applying extreme light. X-lites builds on U.S. and European investments in user research facilities that provide access to cutting-edge extreme light capabilities. Following SciTS guidance for developing effective networks, the X-lites network is built on a coupled, two-layer network concept that has proven to be effective in forming impactful networks. One network layer links user facilities, and the second layer links these facility's users. The facilities provide extreme light infrastructure and serve as entities to support deeper connections. The users are a diverse community of researchers who are taking advantage of these facility investments to explore questions in physics, chemistry, biology, materials, and more. This research will be most impactful if it is conducted by scientific teams and crosses traditional boundaries.

At its inception, X-lites will host workshops and short courses on effective teaming. X-lites will then host meetings to strengthen connections in the extreme light research community, facilitate collaboration, gather researcher feedback on the key technical challenges, and shape the future of X-lites to maximize its impact. These activities will intentionally engage early career and diverse researchers (diverse demographics, scientific specialties, and geographic locations) who are the future of these fields.