The Baker group focuses on understanding surface electron dynamics and interfacial charge transfer in catalytic systems. Much more is currently known about molecular photophysics and photochemical reaction dynamics compared to surface photochemistry due to the challenge of probing surfaces selectively with sensitivity to oxidation state, spin state, carrier thermalization, lattice distortions, and charge trapping at defect states. Femtosecond soft x-ray reflectivity developed in our group is now enabling such studies with the goal of advancing the field of surface chemical physics. 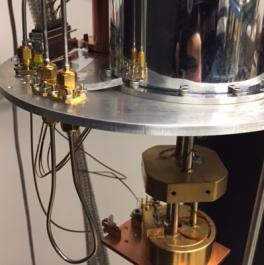 Dr. Gauthier is an experimental Atomic, Molecular, and Optical Physicist who studies the physics of information.  He is developing systems for achieving secure communication between two parties, known as quantum key distribution, and has achieved record-setting rates for key exchange.  In collaboration with Prof. Gregory Lafyatis, he is also developing superconducting nanowire single-photon detectors for applications in quantum optics and quantum computing and studies photonic approaches for quantum computing and quantum machine learning.  On the classical information side, he uses Field-Programmable Gate Arrays (FPGAs) to study the dynamics of large networks with applications to information processing, artificial neural networks, and artificial intelligence. 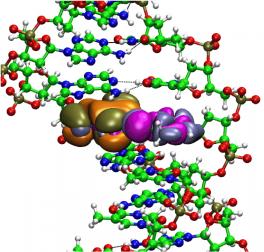 Research in the Herbert group aims to develop theoretical methods and software for computational spectroscopy. We are interested in quantum chemistry (broadly defined), and our group is amongst the leading developers of the Q-Chem software package.

Tin-Lun (Jason) Ho is a condensed matter theorist who works on quantum fluids and cold atom physics. He has long standing interests in superfluid and quantum Hall systems with internal symmetry. In cold atoms, he has pioneered the theoretical studies in multicomponent Bose-Einstein condensates, fast rotating quantum gases, universal features of strongly interacting gases, and super-solid states of spin-orbit coupled quantum gases. He is interested in all aspects of quantum simulation with cold atoms, as well as using cold atoms and excitations in topological matter for quantum information processing.

Our theoretical group studies the ensuing dynamics when ultrashort intense light shines on atoms, molecules and condensed matter systems.  These ultrashort flashes of light are on a time scale of attoseconds (10^(-18) seconds) to femtoseconds (10^(-15) seconds), which is comparable to the time-scale of the electron motion inside matter.  The ultimate goal of this field is accurate imaging and control of electron dynamics on the attosecond time-scale. 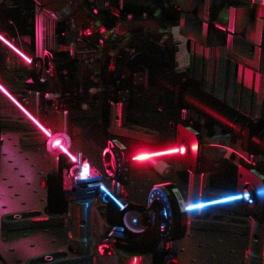 Steven Olmschenk does research in experimental atomic physics and quantum information with laser-cooled, trapped ions.  Trapped atomic ions are one of the leading platforms for applications in quantum information due to their long trapping times, good coherence properties, and the precise control of quantum states enabled by microwave and laser radiation.  Dr. Olmschenk is pursuing methods to directly interface trapped ions with infrared, telecom-compatible photons, where the attenuation in optical fiber is minimized.  Interfacing ions with infrared photons is expected to be advantageous for protocols that utilize atom-photon entanglement, including quantum networks for applications in secure communication and distributed computation. 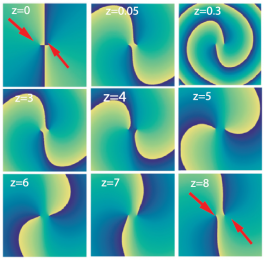 William N. Plick is a Theoretical Physicist working in Quantum Optics and Quantum Foundations. His research focuses on quantum-optical metrology with non-classical light, as well as the properties and generation of complex optical modes - and by extension their use in higher-dimensional quantum information and communication. He also does research into local-realistic inequalities for the characterization of quantum technologies, and more recently, he has been investigating how the formalism of quantum theory may be applied to other fields like psychology and sociology.

Reano's research activity is in the area of integrated optics and photonics. Integrated optics involves the manipulation of light at the micrometer and nanometer scales. It is analogous to integrated electronics. Instead of electrons, however, photons are guided and controlled on the surface of an optical chip. Thin-film technology is applied to realize optical circuits and devices for the purpose of achieving high-performance optical systems with advantages in efficiency, miniaturization, mechanical stability, and economies of scale. Applications span sensors, communications systems, and computing. 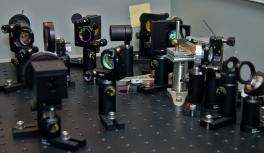 Wes Walter does research in experimental atomic, molecular, and optical physics. In collaboration with Dr. Dan Gibson, he uses lasers, OPOs, and synchrotrons to study negative ions with main goals of expanding the physical chemistry database and better understanding the role of electron correlation in atomic and molecular structure and dynamics. Recent work has focused on high-precision measurements of atomic electron affinities, photodetachment spectroscopy of negative ion bound and quasibound excited states, and studies of electronic and radiative decay dynamics in negative ions. Dr. Walter conducts experiments both on campus at Denison University and at scientific user facilities including the Advanced Light Source at Lawrence Berkeley National Lab and the DESIREE ion storage ring at Stockholm University, Sweden